This is a post from a delayed serie – was published (and written) some months later than it really happen. Actually I live now in Barcelona for almost a year. More to follow.

1st November holidays are a day longer in Slovenia and we decided to split the distance between Ljubljana and Barcelona “equally” – so Marseille is in that middle.

Recently I have been wondering whats my coworker’s opinion about me (to be honest, I don’t care) – I actually spend just 4 hours a day in the office and the rest I work from home on freelance basis. I usually go to work in the same swather – just because it is my favorite 🙂 And occasionally I come to work with some special equipment (short trips, volley) and I just want to run out of the office as soon as possible and I don’t care if someone finds a broken link on the website – so far, noone noticed it, so it can wait two more days. Yes, I really adore my office job!!

I jump on train towards supposed to be good hitchhiking spot outside of Barcelona at 1pm with the goal to reach Marseille or Avignon (depends on last ride) before the night. I assume that my slovenian friend will need a day more to reach Marseille, especially as there is one very hitchhiking friendly country on the way (sarcasm). And this time he is probably no going to make another hitchhiking record in direction Barcelona (Ljubljana – Barcelona in 30 hours and 3 rides). Weather in Barcelona is not the best, something between rain and clouds, so you know you are – – – . I reach France in 3 rides, with a bit of waiting of course. The last ride over the border was a French couple (yei, French people and english are still not compatible things). Girl proudly said she was learning spanish for around 6 years (and still not being able to say one sentence) and the guy was actually working in construction with mostly Portuguese and Spanish people, so we were able to talk all way (yes, after having decent portuguese vocabulary, spanish is not difficult to understand). They dropped me off at toll station and few minutes later I got a ride by truck. Driver was quite funny, French of course, living somewhere in south of Spain for the last 20 years. His spanish was definitely way better than mine, but his pronunciation – still French. Soon we found an interesting topic to talk – Catalan * people! Yes this is the nation that I can say many things about and I definitely have a special opinion about them (something more about it on another occasion).

After 6 hours on the road it looks like I will get stucked 25 km away from Avignon – I had a deal with couch surfer to have a place there. Two more short rides and I finally reached Avignon. Slovenian friend called me and says he is still in somewhere in Italy and that we can met next day evening in Marseille. The following day I am exploring Avignon with two other CSs that are hosted by the same host. They are funny couple, hitchhiking “up and down” from Krakow to Avignon to work as street performers for the last 5 years. Avignon is nice, but small, I think you can see everything in one day.

I got “delivery” to the center of Marseille (you know, is not required, but when it happens, is always nice). Greet my Slovenian friend and than continue to the squat. 🙂 Everyone that ever spent the night or two out in Metelkova or Rog (in Ljubljana) know what to expect. It was somewhere on that level. They squatted up an old house/factory, the living area was actually quite nice (liveable rooms, hot water and even flowers on the windows), functioning kitchen (basically a big hall) internet (from the neighbours) available at one window. So, if you are asking, how we ended up in squat? Actually it was a bit of a coincidence – it is impossible to find a normal CS host in Marseille that is not looking for a girls with bra size XYZ only. The guy that offered to host us was quite clear in the message (at least I got it when he said we are welcome and that he is living in a friendly (also dog an children) community 🙂 )

The people in squat were nice. Very authentic 🙂 . Majority of them work as street artist (live statues, bubble maker etc), some punks, and some people that actually didn’t have any other choice. They were very interesting and it was logical that they really live on budget (earn the minimum of what you need), occasionally search for something in garbage and majority of them are also at least partly freegans and just buy what you really need or when you earn something “too much”.

Masreille has a reputation of a bit “special” city (I actually really like this word, because you can describe a lot with it 😀 ) and is definitely not the safest place (especially for women travelling alone) and majority of people that lives there are Arabs from north Africa (Algeria, Tunisia and Libya). Anyway, isn’t is silly to ask for a beer in a halal fast food place? 😀 (It wasn’t me).

It was our last day in Marseille and while on bus we met a met the group from squat going for a hike in natural park Calanque in the south coast of the city. So, we joined them. It was quite a surprise to see a real nature so close to the city. It was a nice walk, of course I was in my allstars and mini skirt 🙂 Man, I was planing to spend some time in a city, not in the wilderness!

As we were to leave next day to our own way, we were still undecided to either return back to Marseille or move closer to the main highway (the one that continue towards Italy). In the end (yes in the night) we decide to go to the village at the coast in direction south east. We both expected a charming french fishing village and it was everything else than that – a “high society fancy tourist place”, out of tourist season. We are still optimistic and hope to find a free place to sleep (1st November is already cold to sleep outside). We decide for the best plan, to go for a beer and ask in a bar (this usually works well) and of course French people doesn’t need to pretend that they are French (ie. I don’t understand what you want) and keep on pointing out to the fancy hotels. City was really empty, almost no one was outside. After awhile we met the group of Tunisian guys (yes, those folks that hang 24h a day in front of the same bar and nothing else). We soon realize that their decent italian and my broken spanish is the best way to communicate. “Casa abandonada” was the magic word and they were pointing to the house literally next to us – and didn’t look like abandonada. But they knew is open and even have a running water (but probably no electricity).

Chaka! It was a nice sleep and even possible to lock the apartment from the inside.

Next day we are going our own directions east and west. Every now and then, you get a really funny ride while hitchhiking but it rarely happen that they are two in the row. Just on the other side of Marseille I was picked up by “an uncle”, 60+. Standard. F* French language that I really have zero knowledge. Dirty car, cigarette boxes everywhere, cigarette ashes also. Soon the uncle asked me, if I smoke. I say I don’t but it doesn’t bother me if he does (yes, his car his rules). He kept on asking me the same, until I finally realized that he is not asking about the cigarettes. I started to laugh, especially because it was so unexpected. Really, a 60+ old man is asking me if I want a joint? And he is insisting – you can’t have a joint without a coffee! After a coffee break at the first station the ride continued for the next 120 or something km.

After waiting nearly for an hour close to Montpellier (a quite shitty spot, but you are never sure either you should move to another place or not) a super loaded banger stopped. Even with two spare tires and two spare wheels on the roof. And you know, if we already have so much stuff, we can also pick one more person! Soon I realized we are not going to continue on the highway (because the toll is too expensive) and the couple offered to go to Barcelona with them – but in 3 or 4 days. Well, the only problem is I have to be back to the office the day after tomorrow. Their company was nice and after a while we decide to make a “toilet stop” and the van on the parking place offered us everything possible – means legal and illegal substances (well, there was almost nothing legal except the alcohol).

I still didn’t know where the French couple is heading to. The girl was a bad GPS with a huge maps book and in every roundabout we needed to make at least 5 circles just to be sure we are going right (but we didn’t). We needed few hours to move a bit more than 100 km towards spanish border. I’m not sure how (or if) they managed to reach Mali and continue their African trip, but at least they had much fun anyway. 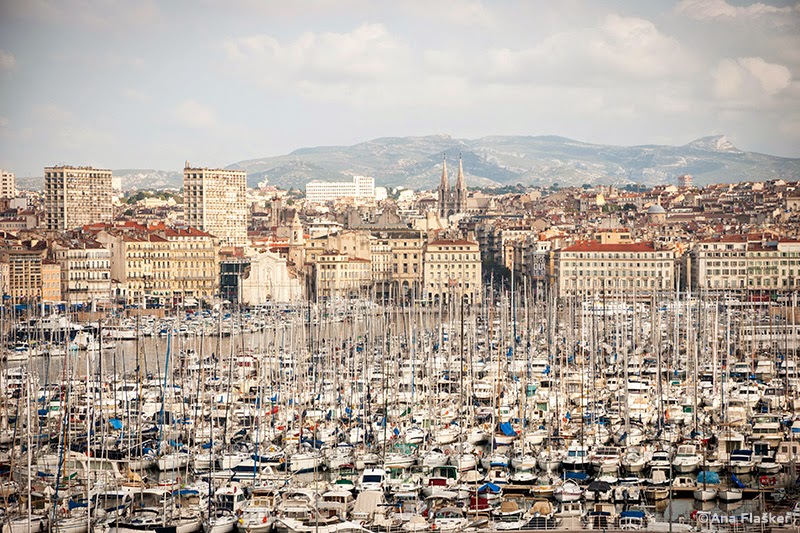 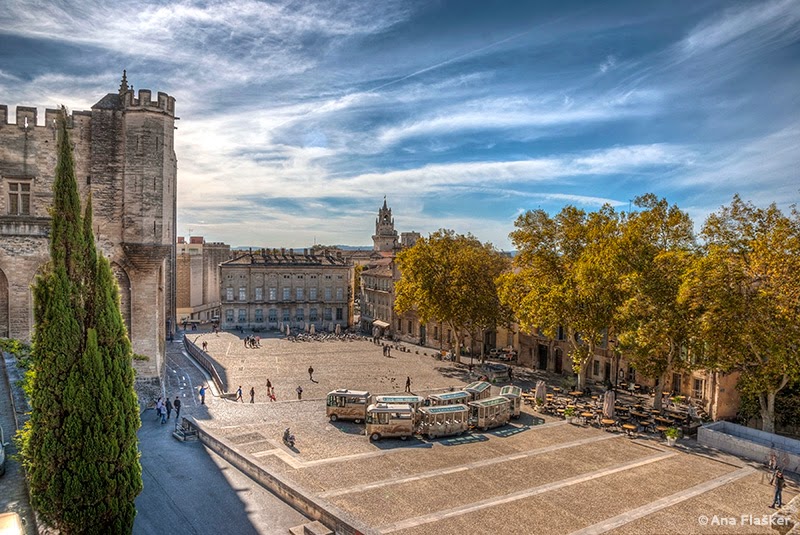 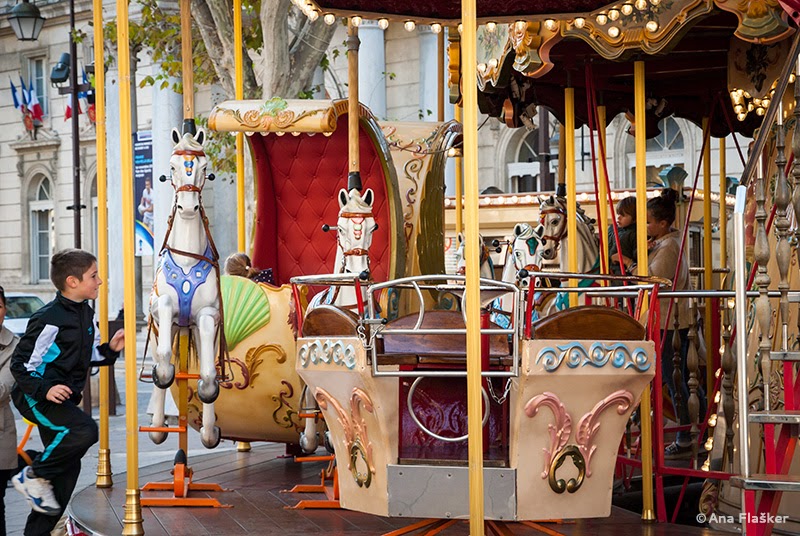 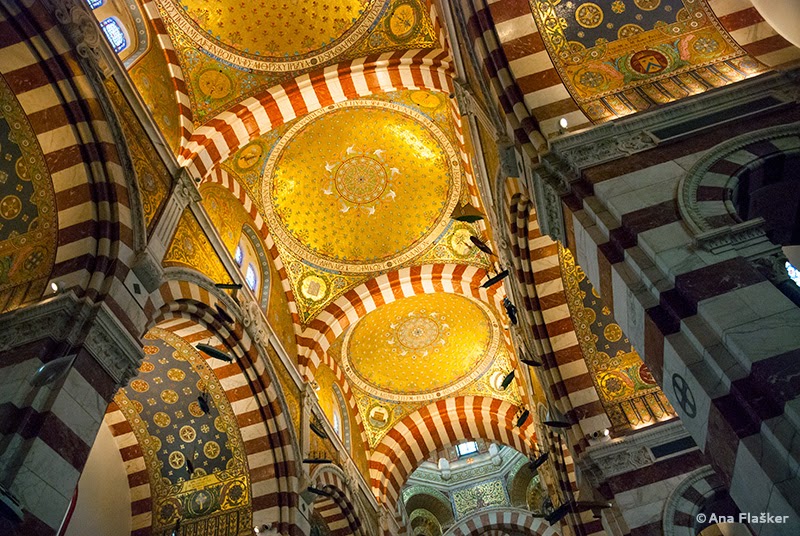 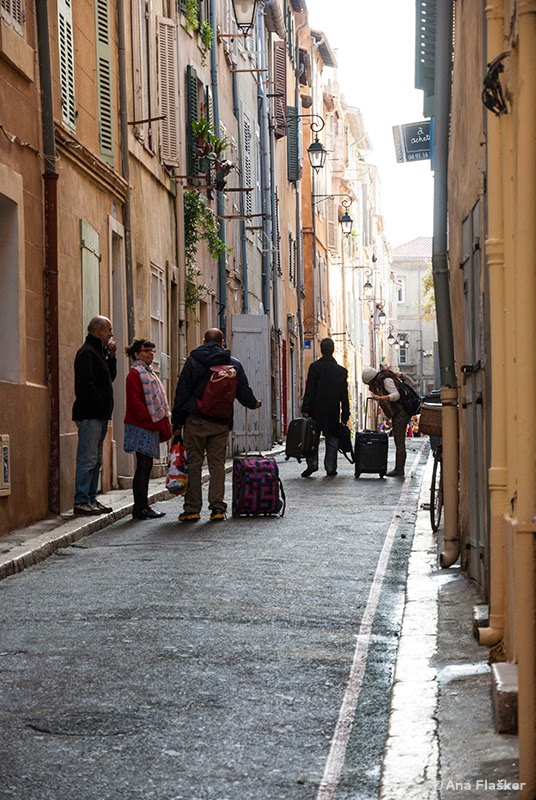 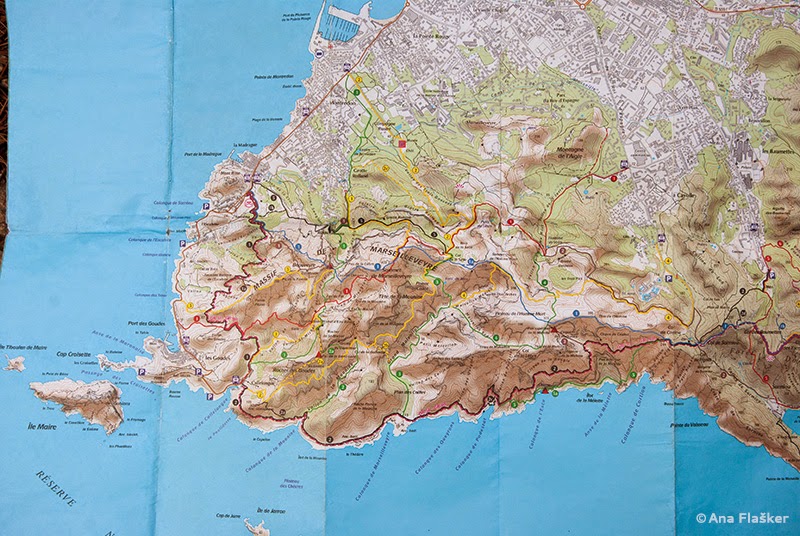 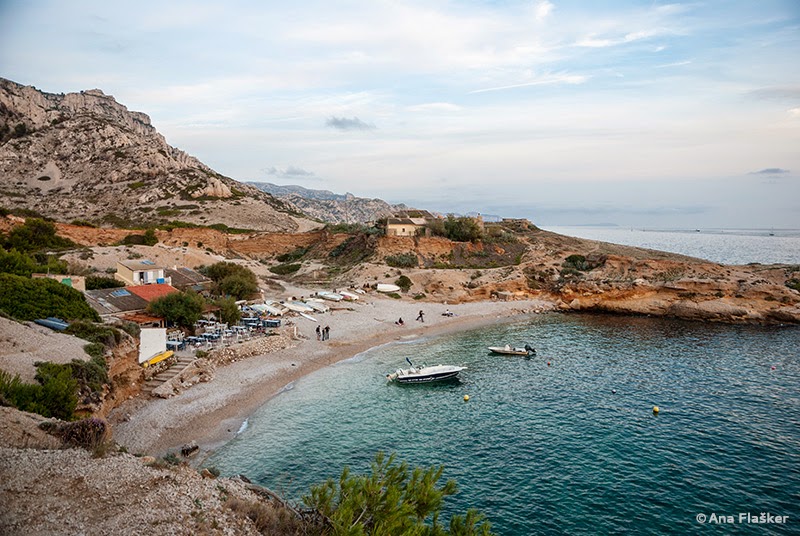 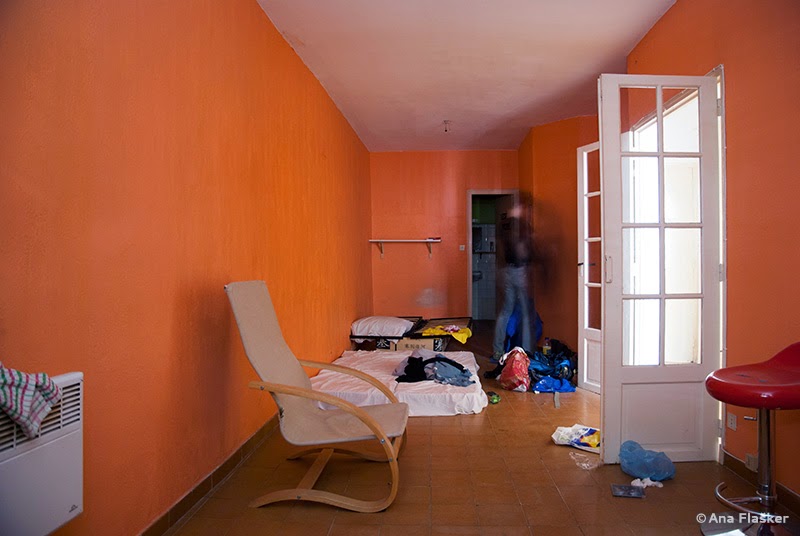 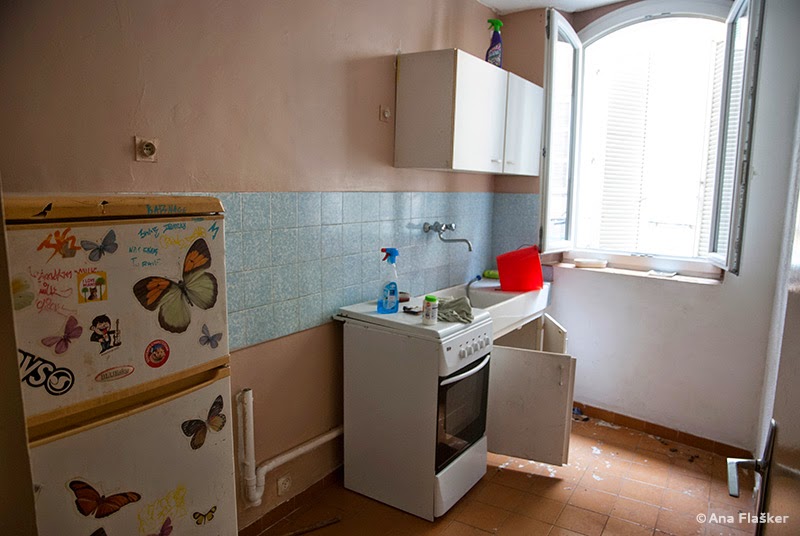 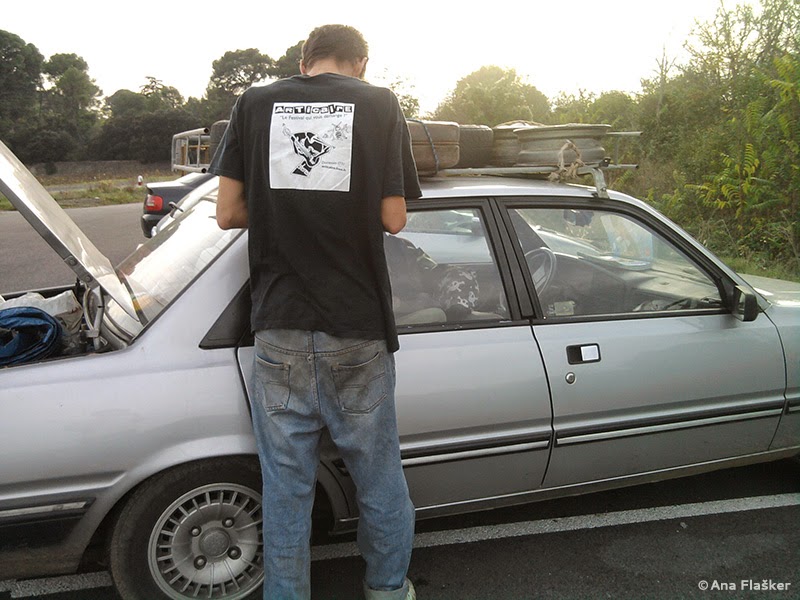