People are constantly asking me how I see things going on in Catalonia, about referendum and what I think about Catalans. Here are some stereotypes and some bullshitting about “hot topic” 🙂 I didn’t dig into history lessons, you have wikipedia for that.

Catal·lans are quite special people. Actually, to be honest, I really dislike them. And I get sick every time someone mention them. I don’t count myself as intolerant person, but I admit without a problem, that I like some nations more than another. And that I also changed my mind about some nations when I realized that not everyone fit the stereotypes and some are actually really cool (maybe it was just initial bad luck to know good representative amount of some people). After interesting discussion about different nation’s stereotypes one my flatmate said that “if you hate all nations equally, you are not a racist.” 🙂 Well, definitely true, but sadly I think that Catalans are way more annoying than my average in/tolerance is. All my spanish and half-catalan friends know that I have always something to tell about the Catalan topic, but actually noone really bothers with it – never say never.

After I moved to Barcelona I thought they are just rumours that Catalans are stingy and weirdos and they don’t like foreigners and they feel like they are on the list of endangered species. Soon I realized, that this things are actually true and I can add few more on the list. Well, I might had really paid more attention to their stereotypes, but some are so clear, that you would notice something is “wrong” even if you would never hear about. I find Catal·lans quite haughty and arrogant and they think they are very important and that they are occupied – and occupation is root to all of their problems.

Not so long after I was already living in Barcelona I met a “pure” Catalan guy at one design event. Well, nothing special about, from all IT and design events you always come home with bunch of business cards and new contacts, but this time was clear that the guy would like something more than just a business card. He was very persistent and haven’t gave up and after more than two weeks of excuses from my side I had nothing left to say and had to go for a drink. Of course my flatmates were updated with things going on and they said I definitely should go as it is not so easy to score a “date” with a Catalan. I didn’t count it as a official date, but yea, when someone insists for two weeks to meet for a drink, it might be. At that time I didn’t have any real-life frustrations against Catalans, but I was just eager to find out if stereotypes are correct or wrong. Just after I left the house a flatmate friendly reminded me not to forget my wallet – yes, we were joking all afternoon how stingy Catalans are. Meeting itself was not such a disaster, I had my first (and last) Catalan language lesson and when it was time to go both of us put a two euro coin at the table. Well, I am not a feminist, but I think it is a nice gesture that guy that haven’t gave up for two weeks offers to pay – I actually like to split the bill on half afterwards. I just find a gesture very nice.

Catal·lans can even bit Germans when it comes to how to split a bill with friends. First, there is no tips in Catalonia! Never. Because “they already charged what they want you to charge”. And fuck all those tourists that are living the tips and now even Catalan waiter has problem to bring a drink to another Catalan person. Well, when going out with (half)catalan friends for a drink or dinner, you will never split a bill on half or thirds or whatever, but you will always pay exactly your part, not more or less. I really hate to be picky about the cents, especially when you are out with your friends, and once you are going to pay a little bit more, next time less and that’s it! I think all Catalans deserve to have a certificate in finances, I have to energy to count the cents when I am in a bar.

Pure Catalan people are quite difficult to meet and I always joke that they probably live somewhere in ghetto. They don’t like foreigners, because we don’t speak catalan. 1) as a foreigner here everyone start to learn spanish first, as you can speak with 470 millions of people and second, Catalans also speak spanish (well, most of spanish people will tell you that their spanish is not really grammatically correct). 2) I don’t like melody and sound of catalan language. With the pronunciation of L and L·L they definitely beat Croats and Serbs trying to speak slovenian for 10 years. 3) I am not even trying to understand catalan and won’t even try to speak it – on purpose. Every time you speak with Catalan person they always switch to catalan after you say something in spanish. The only way how to force Catalan person to speak spanish is to start conversation in english, than nicely mention that you can speak in spanish but that you understand that is against moral rules and there is no enough money in this world that Catalan person would speak spanish (sorry, castilian). And to speak english is of course always a big no and half of spaniards and catalans would rather commit suicide than speak english – and now you are able to speak spanish – ehhm, castilian!!

You realize very soon, such a nazis (officially: patriotic) they are, when you have some papers to arrange. In public institutions there are just pure 100% Catalan working and of course they always switch to speak catalan. Once you ask them to give you the papers in spanish not in catalan, you usually get reply that catalan and spanish are almost the same. How catalan is now suddenly the same as spanish? So, if it is the same for you, please speak spanish and give me papers in spanish as it is not the same for me.

In the beginning I was “lucky” and was working for a Catalan company for a bit more than half a year. And of course majority of employees was Catalan. What I still find as phenomena is that every Catalan person after 5 or 10 minutes conversation clearly states that they are occupied and how occupation is their biggest problem for everything. Crisis, taxes, spanish king that hunt elephants in Africa, tolls on highways and occupation. And their solution to all those problems is to be independent. And all fault for everything goes to Madrid. Not that they have regional parliament also. Tolls on highways are literally every 30 km and outside Catalonia on every 500 km for the same price as you would pay for 30 km in Catalonia. And you are occupied by who? Ah, Spain? But isn’t it you have a big autonomy and all schools are in catalan and also universities, except those two that have classes in english and spanish also?

And they are always the poorest and only they were the only nation screwed in the history. It is definitely true that under Franko regime they were quite fucked up, but this was years ago, and I always have the feeling the only real thing that they are picky about is catalan language (it is official in Catalonia, but not in all Spain). And probably they never heard that there was/is bunch of other nations that were/are really under ocupation – but the suffer Catalans are getting trough is of course the biggest one.

Once we had a discussion with a catalan girl who was insisting that catalan and spanish languages are equally represented in schools, because kids are learning spanish 3 hours/week from their first grade on. And all other classes – math, biology, history? Ah, those are all in catalan of course. I really don’t see catalan do be underprivileged in Catalonia.

In the time just before the unofficial referendum that was officially called differently and it was clear that nationalist here have majority against those that don’t care about or are against. I don’t see referendum to equal independence but referendum is a way to decide about it. To be more picky the big dream of “Catalan super nazis” is not just independent Catalonia but to join Aragon, Valencia and Balearic islands under the Catalan flag. Also the weather forecast on the FGC trains show “expended” Catalonia and not all Spain (yes, Spain is to big to fit it on screen) or only Catalonia. Maybe you will have more lucky to see spanish weather forecast on renfe trains.

To go back to “referendum”. I still think that at official referendum about independency they victory would go to independence, but probably not with such a big support as it was not. Around 40% of people voted and everyone above 16 years was able to do it (legal age in Spain is 18) and referendum was held in Catalonia only, not in other surrounding regions as big catalan dream is. I actually don’t care if they are independent or not, but until they think that all their problem are Madrid based, it won’t be any better after the independence. In public institutions they are only uncles cousins working. Hard to believe until I seen a woman pressing the machine to give me the ticket to queue – I is so clear that machine can do the job for her and that noone is going to break a finger to press letter B on the screen. Even my intelligence or stupidity are on the level where I usually take all the tickets possible as they usually send me to other queue.

To sum up – until you will have hard time to speak spanish and even less english all the foreigners are going “to take your jobs” that require decent english and don’t require fluent català. And when you get the independence please don’t forget to built the wall around to protect yourself agains Schengen invasion and set visa for all other nations and please make it so, that invitation letter in català would be obligatory to get it. In that case you can get at least another 50 € per every tourist visiting your country, and you will be rich without sweating much. Until those times, just continue buying nicely marked catalan products in supermarket. And I might don’t even need to get a statement that I am not required to pay difference in taxes to Republic of Slovenia. Nonetheless, Catalonia already has its space in digital world, under .cat domain. 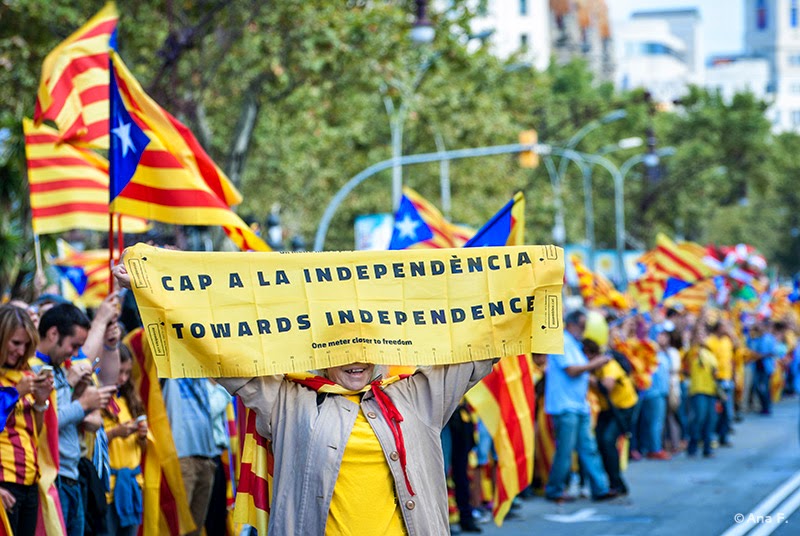 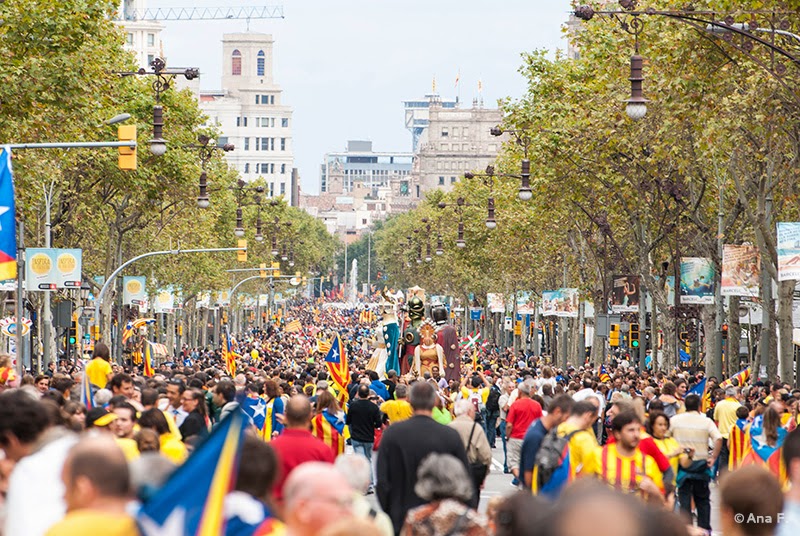 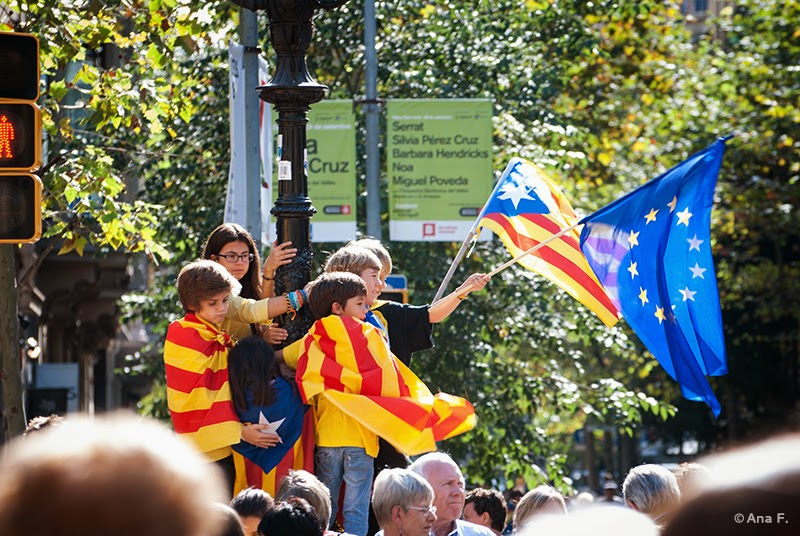 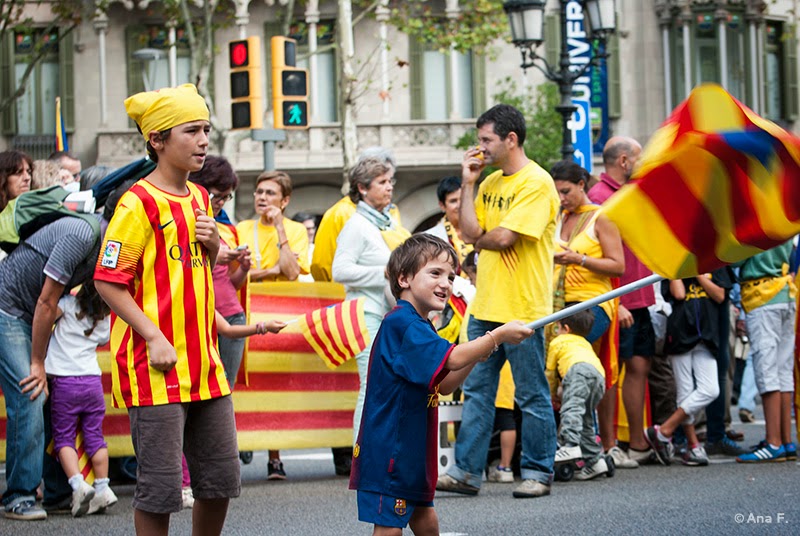 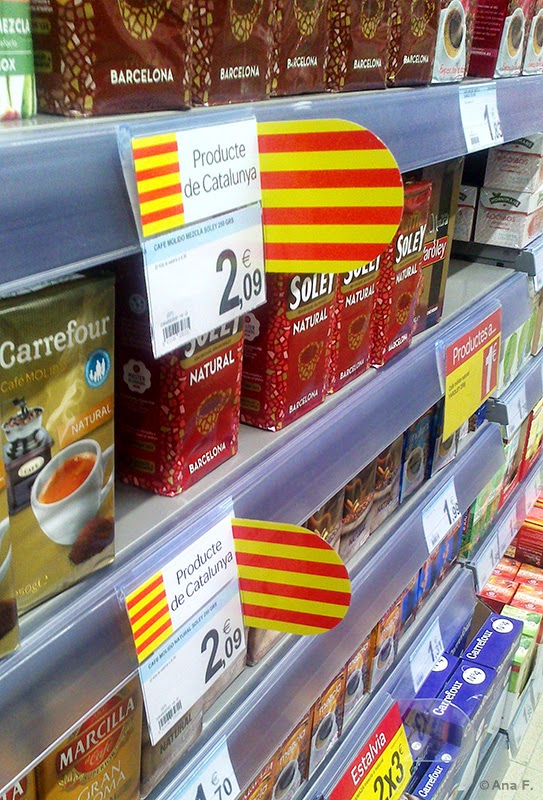